On Tuesday October 21, 1997, the Indigo Girls came to Mary Washington College and performed in Dodd Auditorium for an 8pm show. Before the sound check, they came up to the radio station for an interview with Assistant Station Manager Natalie E. Illum ’98 and Bullet journalist Huyen Campbell ’98, who also wrote the article about the show in that week’s paper. Station Manager Ryan MacMichael recalls the day:

“The Indigo Girls were one of the largest national acts to play during my time at Mary Washington, so it was exciting to get them to come up to our humble little station for an interview. Somehow, I was tasked with going to escort them to the station for the interview, so I met Amy and Emily at Dodd Auditorium, where the campus police would drive us in a van the short distance to the station. The driver had Amy and Emily sit in a row of seats in the van and guided me to the trunk of the van to sit on an egg crate. Amy and Emily insisted that I sit up with them instead, which I did.

When we got to the station, as we were travelling up to the attic of Lee Hall in the elevator, I pre-apologized that it was such a small station and mentioned how I really appreciated them taking the time to come up. They graciously said they preferred visiting small college stations.

They were incredibly down-to-earth, gave a fantastic interview, and took time with all of us afterwards, signing albums, taking photos, and standing on our beat-up couch to sign the “Wall of Fame” in the studio’s office.”

Included in this item: 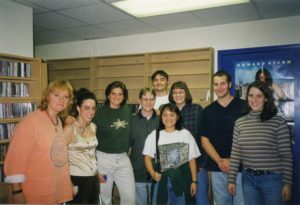 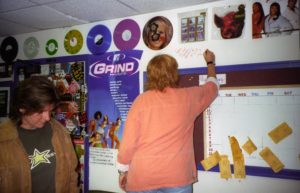 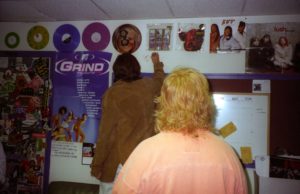 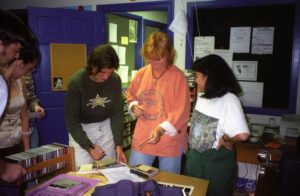