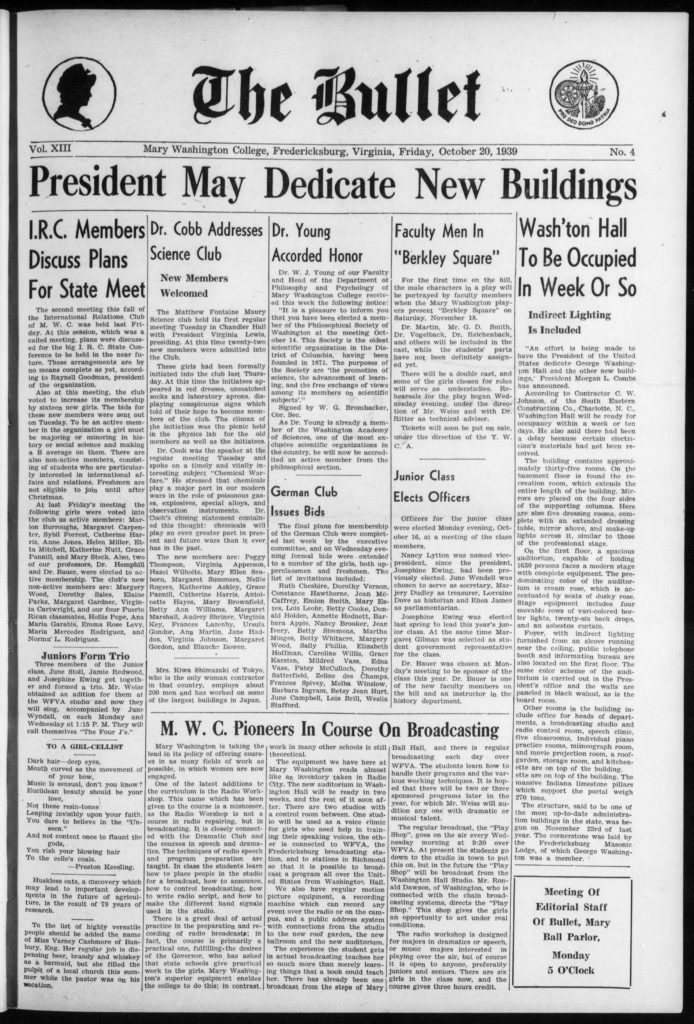 Mary Washington is taking the lead in its policy of offering courses in as many fields of work as possible, in which women are now engaged.

One of the latest additions to the curriculum is the Radio Workshop. This name which has been given to the course is a misnomer, as the Radio Workshop is not a course in radio repairing, but in broadcasting. It is closely connected with the Dramatic Club and the courses in speech and dramatics. The techniques of radio speech and program preparation are taught. In class the students learn how to place people in the studio
for a broadcast, how to announce, how to control broadcasting, how to write radio script, and how to make the different hand signals used in the studio.

There is a great deal of actual practice in the preparation and recording of radio broadcasts; in fact, the course is primarily a practical one, fulfilling, the desires of the Governor, who has asked that state schools give practical work to the girls. Mary Washington's superior equipment enables the college to do this; in contrast, work in many other schools is still theoretical.

The equipment we have here at Mary Washington reads almost like an inventory taken in Radio City. The new auditorium in Washington Hall will be ready in two weeks, and the rest of it soon after. There are two studios with a control room between. One studio will be used as a voice clinic for girls who need help in training their speaking voices, the other is connected to WFVA, the Fredericksburg broadcasting station, and to stations in Richmond so that it is possible to broadcast a program all over the United States from Washington Hall.

We also have regular motion picture equipment, a recording machine which can record any event over the radio or on the campus, and a public address system with connections from the studio to the new roof garden, the new ballroom and the new auditorium.

The experience the student gets in actual broadcasting teaches her so much more than merely learning things that a book could teach her. There has already been one broadcast from the steps of Mary Ball Hall, and there is regular broadcasting each day over WFVA. The students learn how to handle their programs and the various working techniques. It is hoped that there will be two or three sponsored programs later in the
year, for which Mr. Weiss will audition any one with dramatic or musical talent.

The regular broadcast, the "Play Shop", goes on the air every Wednesday morning at 9:30 over WFVA. At present the students go down to the studio in town to put this on, but in the future the "Play Shop" will be broadcast from the Washington Hall Studio. Mr. Ronald Dawson, of Washington, who in connected with the chain broadcasting systems, directs the "Play Shop." This shop gives the girls an opportunity to act under real conditions.

The radio workshop is designed for majors in dramatics or speech, or music majors interested in playing over the air, but of course it is open to anyone, preferably juniors and seniors. There are six girls in the class now, and the course gives three hours credit.